Delinquent account! This restaurant has an unpaid balance for our services. Unfortunately, it has been our experience that account delinquency is the result of an establishment’s financial difficulties, which also commonly translate into a deterioration in service and food quality. As we have not been given the opportunity to assess the status of this restaurant, we cannot in good faith recommend it to our customers. While we can’t currently endorse this venue, we are happy to suggest a number of other high quality restaurants to meet all your dining needs. Thank you for your understanding.

The Rittenhouse Square area, around 18th and 19th Streets, is an animated bustle of activity and a bevy of enlivening restaurants. But move to Chestnut Street, one block east and a few blocks north of the Square, and the streetscape mellows. That's where Le Castagne stakes its turf – in a relatively quiet area not far from the bizarre and bizarrely famous Mutter Museum and the stately Frank Furness-designed First Unitarian Church. Congestion and crowds decompress palpably in this neighborhood. You'll even find a très convenient open-air parking lot immediately adjacent to Le Castagne. That's a rarity in the more congested areas farther east.

Le Castagne introduced its exquisite Italian cuisine to this quarter in 2001 and has thrived ever since. Le Castagne means “chestnut” in Italian. The name pays dual homage – first, to a nutty culinary staple of northern Italy, and second, to the famous Philly street where the eatery stands. The aptly named Chestnut Street was once lined with magnificent chestnut trees. Unfortunately they're long gone, victims of the chestnut tree blight that eradicated four billion North American chestnut trees at the turn of the 20th century. Notwithstanding the loss of its verdant canopy, Chestnut Street remains a pleasant pedestrian path chocked full of stores, pubs, restaurants and shops.

The Sena family owns Le Castagne as well as two other popular Quaker City eateries: La Famiglia and Ristorante Panorama. Le Castagne, the last one to join that trio, is their ode to northern Italian cuisine, which is masterfully crafted by Chef Brian Wilson, a Johnson & Wales grad who harmonizes flavors mellifluously.

A laid-back, welcoming vibe rings throughout Le Castagne’s business-casual yet elegant digs. Le Castagne is a Mecca for Philly's business set, particularly at lunchtime. In the evening, the crowd diversifies. The suit set is still present, but so is a diverse group of diners hankering for some of the city's finest Italian food. All of them find their groove in this space where contemporary class melds with casual confidence.  Privacy partitions and crisp white tablecloths play smartly against stylish black dining chairs. A series of minimalistic reddish columns crossing the dining room give a nod to contemporary stylishness, while red brick walls insinuate old Philly nostalgia. One of the sleekest, swankest bars in the city serves up a number of specialty martinis and attracts a stylish after-hours crowd. The wine cellar features 200 different selections, including more than 80 varieties of Italian wines. Wines from New Zealand, Australia, California, and Africa expand the choices. The expansiveness of the list coupled with Le Castagne's prowess and sophistication in the oenophiliac arts has earned it Wine Spectator's Award of Excellence.

Chef Brian Wilson riffs on Italian cooking but doesn't abandon its flavor essentials. Chef Wilson has mastered a seamless contemporary blend of classic techniques. He uses an impressive palette of ingredients, tossing in some imaginative and adventurous twists on bistro cooking for good measure. He's headed the kitchen operation since Le Castagne's 2001 opening. His longevity validates what seems to be the Le Castagne modus operandi: Price it right, cook it with TLC, give them a warm welcome and they will come. Indeed they have. Le Castagne boasts a legion of loyals who can't get enough of the home-made breads, pastas, gelatos and desserts – especially pastas. Philadelphia Magazine recognized Le Castagne with its “Best Pasta” award this year.

Dinner guests are greeted with home-made bread and pesto-olive dip with sun-dried tomato purée. Antipasti and salad selections include not only traditional favorites but also some infrequently seen dishes. Case in point: Flan di Parmigiano Con Crosta di Pistacchio – the ideal starter. A shimmering yellow disc of savory Parmesan custard is poised atop a crumbled pistachio-crust. The flan's delicate silky texture and subtle sweetness are uncommon. A serious port wine and cherry reduction provides drama and semi-sweet contrast. The reddish streaks of reduction that radiate across the plate add visual pizzazz. A side of mixed greens expands the taste/color palette while enhancing texture as well.

House smoked salmon rolled with goat cheese is revealed as Spirale di Salmone e Formaggio Caprino. The smoky flavor of the salmon works in harmony with the piquant goat cheese. Honey scallion vinaigrette decorates the plate and choruses dulcet overtones into this symphony of vivid tastes. A jumble of microgreens, for crunch and bite, cap the ensemble.

Le Castagne's gnocchi is fabled in Philly, a city where pasta is taken seriously and in huge portions. Chef Wilson confects his Italian dumplings in a 3:1 ratio of ricotta cheese to potato. The recipe tends to lighten the texture and enhance the silkiness of the gnocchi which are a bit larger than the norm. Gnocchi al Tartufo Bianco glisten soft and white under flecks of green basil. The avalanche of white pillows are clad in viscous cream sauce infused with an essence of truffles and chopped green onions. Gnocchi di Patate alla Sorrentina animates the palate with a beautiful red sauce and a generous amount of minced garlic. The tomato sauce, thick, chunky and full of diced fresh tomatoes, slicks the dumplings in savory red. A green snowfall of fresh basil adds a smattering of color and spice.

Chef Wilson takes an adventurous turn with Canederli al Burro, pasta he makes from Italian bread. Canederli is a house favorite. The whiff of buttery-sage sauce heralds its arrival at the table. The pasta is fashioned to look like a chestnut – one of several winks accorded on the menu and elsewhere to the namesake nut. Canederli has an interesting consistency – tender to the palate yet more robust in texture than many brother species in the pasta family. A large green fried sage leaf, at once decorative and tasty, feathers the cap of each browned butter and Parmesan sauce-slathered canederli.

Spaghetti alle Castagne is another of the restaurant’s house hits. Any suggestion to remove it from the menu could very well foment a full-on customer revolt. The dish is a quirky, delectable departure from the norm. Spaghetti and woodsy-hearty chestnut sauce are sautéed together, emerging smoky brown. Pieces of diced tomatoes are dispersed throughout the sauce but the pièce de résistance is a generous dusting of cocoa powder that injects a bitter sweet and totally intriguing undercurrent to this clever invention.

Rollatini di Coniglio Con Salsicce e Peperoni is a toothsome preparation of rabbit with not a hint of gaminess. The recipe is busy but the kitchen executes it with no muddling of flavors. The rabbit is rolled and stuffed with spicy pork sausage and roasted bell pepper. The vivid flavor of each ingredient rings true. A stack of microgreens adds crunch to the opus. However it's the creamy lentils bathed in a rich brown butter sauce tinged with Parmesan that keeps the ensemble copasetic and coherent.

Timballo di Agnello Brasato is another Philadelphia Magazine “Best of Philly” honoree. The lamb is slow-braised with three different varieties of sautéed wild mushrooms: shiitake, chanterelle, and oyster. The lamb-mushroom medley rises atop a buttery, toasted, garlicky crostini. The silo of brown lamb and mushroom stretches four or five inches upward to a bright white poached egg coiffed with a tuft of microgreens. A lamb glaze reduction pooled alongside the silo adds depth to the flavor medley.

If you have left any room for dessert, you can’t go wrong with the decadent house -made Tiramisu with an extra splash of coffee liquor. The homemade gelati are also worth their weight – and yours – with intense fruit flavors that vary by season.

All in all, when you're looking for a Philly Italian restaurant that excels not only in preparing Italian classics but also takes some memorably inventive twists, here's some advice: Head for the outskirts of the Rittenhouse district and Le Castagne. Always keep that little chestnut in mind! 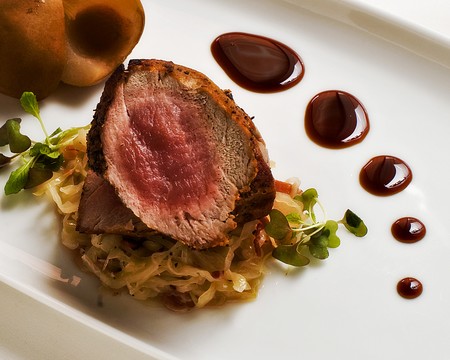 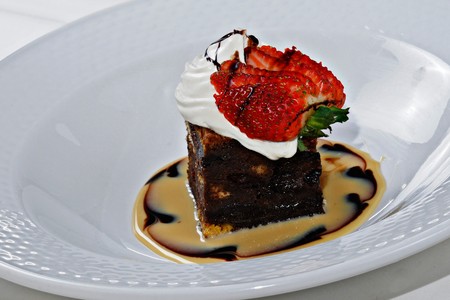 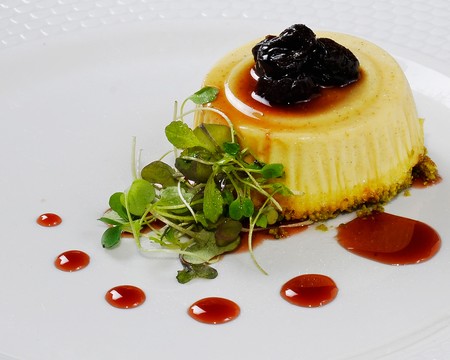 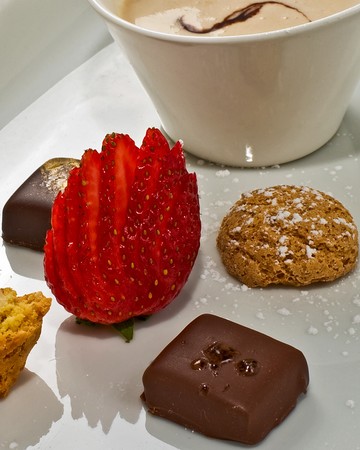 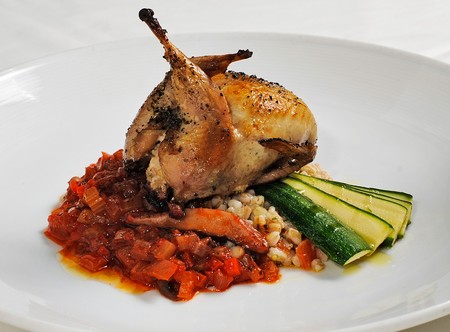 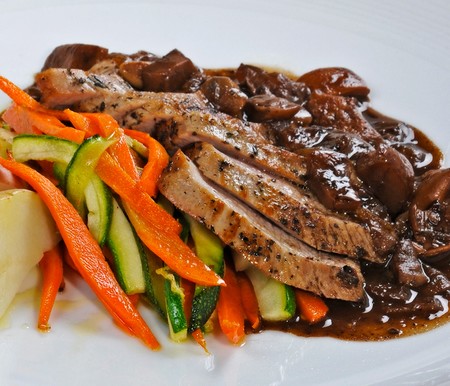 Roasted loin of veal with a balsamic & porcini mushroom demi-glace 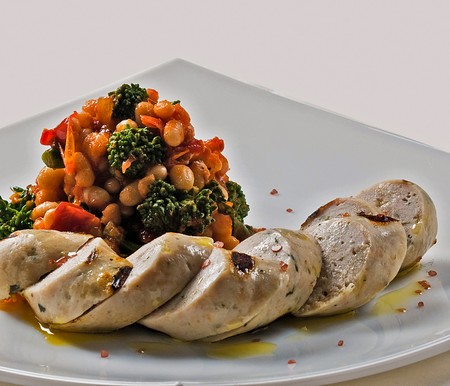 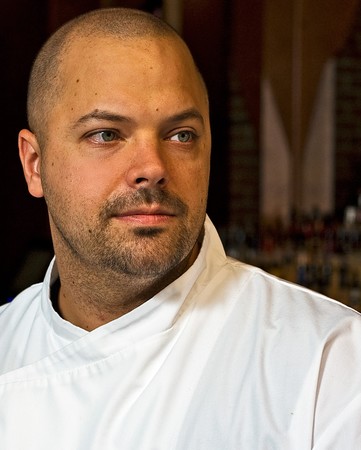 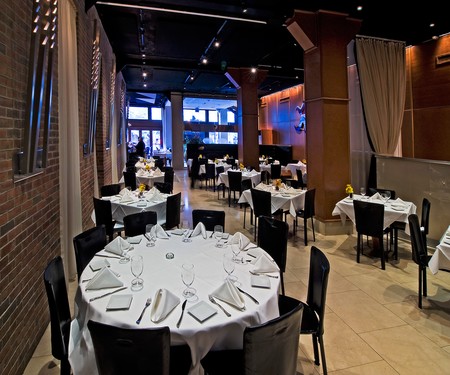 An interior view of Le Castagne

First Course (choice of one)

Second Course (choice of one)

First Course (choice of one)

Second Course (choice of one)

I had an opportunity to go to Philadelphia for business and then was able to have dinner with very close friends: we could not have chosen a better restaurant - the service, food, wine... it was all exceptional and was also a great value.

the room is beautiful, the location is excellent, the acoustics are wonderful, and the table settings are lovely. but the service is brusque and often thoughtless, verging on rude, and, most important, the food is both outrageously expensive and utterly dreadful.

four of us went to Le Castagne for the first time on a saturday night. the bar was busy, and, although we would have liked a drink before sitting, the bartender had no help and only served one of us. and when we went to pay for that drink, she had no time even to give us a bill, so we gave our credit card to the hostess to handle payment and went to our table.

we were seated promptly. drinks were brought. menus were presented. wine was ordered (the wine list is varied and excellent, as one would hope in a sena-owned restaurant). then the food came. the ladies said the salads were fine, albeit unexciting. my friend's ravioli special was outstanding and unique -- a game-meat stuffed ravioli with an egg yolk inside, with pomegranate sauce. truly exceptional. on the other hand, my boar ragu cavetelli tasted like chef boyardee had sauced it, and the ragu was virtually non-existent. the plate was hot, as if it had just been removed from a microwave. we had to flag down a bus boy to get some parmesan and ground pepper.

then on to the entrees. the salmon special consisted of a serving the size of a large sardine. the rack of lamb ($30+) was tough and tasteless, its only resemblance to lamb being purely coincidental. when advised of this concern, our waitress only shrugged and walked away. my stuffed pork chop was quite good. but my friend's veal chop ($38 !!!) was tough and tasteless as well. the vegetables accompanying all of the entrees -- all the same --were soggy and overcooked.

and then came dessert -- the crowning insult. our server highly recommended the chocolate filled cheesecake. so i opted for it, and my fellow diners ordered the carrot cake and the gelato sampling. the gelato was, well, gelato. ok -- but nothing to write home about. the carrot cake reminded us of sawdust -- completely without any taste or flavor whatsoever. and the cheesecake tasted like moist cardboard. our waitress, a big fan of this item, inquired as to my thoughts, and when i told her, she uttered the most incredible response that i have ever heard at any eating establishment: "ME: It tastes like moist cardboard." "WAITRESS: Oh, that happens sometimes when they leave it too long in the microwave."

She then turned an walked away to prepare our check, on which the cheesecake charge remained. i have eaten many enjoyable meals at Panorama and certainly expected an equivalent experience at this restaurant. but this was a travesty, at over $75 per person, including 2 reasonably priced bottles of wine and four drinks. needless to say, the Senas have lost a customer, and, hopefully will read this review and look into the incompetent oafs operating their western outpost.