This venue is no longer open.

None compares to Nan

Nan is a destination location. Located on the corner of 40th and Chestnut, near University City, it stands virtually alone in its location as a fine dining institution. The modest exterior, outfitted with a simple sign that reveals the name of the restaurant, serves as a stark contrast to the complexity of the meals served inside. The interior of the restaurant retains the simplicity of the exterior, with off-white walls decorated minimally with a few paintings and wall hangings. The tables boast crisp white tablecloths, and on the night my guest and I arrived, a single fresh red rose. The décor, like the cuisine, seems to combine influences from the both East and West, arriving at a serene environment where the food is the main focus.

The crux of Nan’s cuisine, much like chef/owner Kamol Phutlek, hails from Northern Thailand. Yet there are French inflects that run throughout almost every dish at Nan, which are derived from Phutlek’s years of restaurant experience right here in Philadelphia. Phutlek’s beginnings in the US were quite modest, as he started out washing dishes at Philadelphia’s La Panetiere in the 1970’s. From there, Phutlek worked his way up, one French restaurant at a time. Phutlek’s Thai background did not give way to his French cooking experiences, but rather the training he acquired allowed him to refine the cuisine he grew up with, to create the sophisticated hybrid that is now served at Nan.

When my guest and I walked through the entrance, a hostess was there to greet us and promptly guide us to our table. All of the tables, about 25 two- and four-tops, are lined up against the various walls. There is one table facing the window, and on the night we went, there was a group of six seated there. Due to the small space, Nan can accommodate groups of larger sizes such as six, but only one of such capacity on any given night. Nan is more conducive to parties of two to four because of the size, but also because of the atmosphere which is more suited for quiet conversation than louder group dinners. Nan attracts of fairly mixed crowd of young and old, hip and traditional. What every diner has in common, however, is an interest in the food.

Nan is a BYO, so the only beverages they offer are a small selection of sodas, tea, coffee, and bottled water. My guest and I brought our own bottle of red wine, which was opened for us as soon as we sat down, just as our menus arrived. In addition to the standard menu, our waiter read off to us six of the specials, which he explained change about every two days or so. The specials include appetizers, and fish, meat, and game-centric entrees. On this particular night, some of the special entrees included a Ginger Miso Seabass served with garlic-mashed potatoes, and a Crab Cake with a beurre blanc sauce that could be ordered as either an appetizer or an entrée.

The standard menu retains some Thai classics, such as Pad Thai and Chicken Satay. In explaining the specials, our waiter took the time to answer our specific questions about the preparations of the dishes and the frequency of the menu changes. The staff in general was very helpful, informative, and professional throughout the whole meal.

Because Nan serves self-proclaimed “modern food,” as dictated by their business card, my guest and I decided to order appetizers and entrees that seemed the most interesting as well as ones that our knowledgeable waiter recommended. Thus our appetizers consisted of the French Bean Salad and the Escargots in a puff pastry, both recommended to us. Our entrée choices were both specials, also recommended by our waiter: Crab Cake with a beurre blanc sauce and Pepper-crusted Filet Mignon served were garlic-mashed potatoes.

After we placed our order, we were brought two soft rolls with butter. Our appetizers arrived shortly after and were placed in front of us with a brief description by the waiter, which added to the very food-centric vibe at Nan. Both dishes were very simply plated and yet visually stunning at the same time.

The French Bean Salad was served on an over-sized round white plate. The salad consisted of a hearty-in-portion yet delicate-in-cut mound of French beans, with thinly sliced white button mushrooms sprinkled on top. Baby tomatoes sliced in half surrounded the green mound and a red wine and mustard vinaigrette was dotted artfully between each tomato. The beans themselves were also dosed generously with the dressing, which gave the crispy green beans a nice contrasting creamy texture. The salad was both a refreshing and satisfying start to the meal.

The Escargots in a puff pastry were equally as pleasing. The escargots were buttery and tender, with a hint of garlic. The snails were buried within a soft and hot-from-the-oven puff pastry, which flaked delightfully as I dug my fork in to get to an escargot. The combination of the mildly sweet buttery pastry with salty snails awakened my palate and primed me for the entrees to come.

Our entrees arrived shortly after our starters and were accompanied, again, by a brief description from our waiter. The Crab Cake with beurre blanc sauce consisted of two sizable cakes topped with micro-greens, surrounded with a delicate circle of the beurre blanc and plated elegantly on a round white plate. The crab cake was delicious. What I appreciated most about it was the amount of crab, rather than cake, it consisted of. Large meaty pieces of crab made up the majority of the cake, which was flavored subtly with the creamy beurre blanc and the salty but sparse breading that served as the cake’s glue. This was truly a delightful and satisfying entrée, and I later thanked our waiter for the solid recommendation.

The Pepper-crusted Filet Mignon with garlic-mashed potatoes was just as good. The mashed potatoes were served on a separate plate, allowing the filet to stand alone quite dramatically in the middle of the white round plate and completely surrounded by a thick wine sauce. The piece of meat itself was extremely tender, juicy, due to the actual quality of the meat and also to the fact that it was cooked at a perfect medium-rare. The sauce that surrounded the meat was nothing short of delectable, made of red wine, port wine, and finely diced shallots. The sauce was most likely also thickened with a bit of flour, allowing it to adhere nicely to the meat and rendering the steak a slight sweetness. The mashed potatoes were everything mashed potatos should be: creamy, filling and not too overpowering, even with the incorporated garlic.

After our more-than-satisfying entrees, the waiter allowed us about five minutes to talk and digest before bringing over the desert menus. Although I was leaning toward the white chocolate bread pudding, the waiter told me that the molten dark chocolate cake was his personal favorite. Since he had already given us such great meal advice thus far, we decided to go with his suggestion. The Molten Chocolate Cake, which arrived in less than 10 minutes, was set in the middle of the plate, with a creamy white chocolate sauce on one side, and a tangy raspberry sauce on the other. The cake itself was everything he promised, with the molten inside oozing promiscuously out of its firm shell to mingle with the sauces. Although not the most inventive dessert, it was a sweet way to end a sweet meal.

My guest and I left feeling both satisfied and enlightened. Not only was the food fantastic and exciting to boot, the serene atmosphere and congenial service made our meal that much more enjoyable. Nan is truly one of Philadelphia’s best kept secrets. 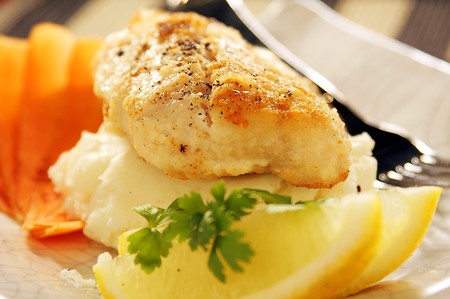