In a city where every restaurant is striving to be the next big thing, The Oyster House manages to stay true to its roots. Now back in the hands of the original owners, The Oyster House has been given a much needed face lift. Still located on the unassuming Sansom Street, The Oyster House remains a grand old tradition of fresh fish at its finest. With dishes like Southern Fried Oysters with Chicken Salad, Herb Roasted Bluefish, and Snapper Turtle Soup, classic seafood is alive and well in this no-nonsense setting. Sam Mink, the son of original owner David Mink, strives to provide classic Oyster House dishes with a modern twist.

My heart always skips a beat when I see a raw oyster bar. No matter what city I’m in, I always feel as if I’m at the beach, and the fast hands of a professional shellfish shucker are almost hypnotizing. Few things make me happier than a good beer and an even better oyster, and as soon as I walked through the doors of the Sansom Street Oyster House, I knew I was in for an authentic seafood experience.

Sansom Street is a narrow, unassuming avenue of parking garages, take-out joints, and the occasional dive bar; a location that actually complements the low key atmosphere of the restaurant very well. While it is unfortunate that the only view available from the restaurant’s windows is of a car-filled garage, the crowd and the general attitude just wouldn’t be the same if Sansom Street Oyster House was located in a ritzier area such at Rittenhouse Square or Old City.

Part of the Oyster House’s charm lies in the hospitality of its founders and former owners – the Mink family. The Oyster House was born over 30 years ago, but not in the form we know today. It was inspired by Kelly's – the beloved Mole Street seafood restaurant that opened in 1901 – which Sam Mink purchased in 1947. He left his son, David, in charge of Kelly’s until it was sold in the early '70s; and after a brief hiatus, David opened the Sansom Street Oyster House in 1976, reinventing himself and the very notion of what a Philly fish house was all about.

After establishing the Sansom Street Oyster House as an authentic and respected seafood favorite, David handed head chef and restaurateur Cary Neff the keys to the kingdom in 1999 – not only to the kitchen, but to ownership of the restaurant as well. Since that time, Neff, formerly of the restaurant Cary, has been serving up his unique take on classic fish favorites – and Philadelphians keep coming back for more.

For those in search of a quick lunch spot or a lively happy hour venue, the Oyster House’s bar area never disappoints. In the warmer months, the bar’s café windows are opened into the street, and a highly coveted table (yes, just one) is available outside for anyone lucky enough to snag it. Finding an unoccupied seat at the granite-topped bar is always a challenging task. After all, they’re front row seats to the best show in town – the restaurant’s renowned shuckers.

Shucking is a longstanding art form among devoted shellfish followers, and the Oyster House has no shortage of talented workers who can serve up the tasty delicacies with precision and ease. In fact, the Philadelphia Inquirer featured the restaurant’s most esteemed shucker, Ameen Lawrence, in his very own article because of his unparalleled talent and skill with the knife.

I walked through the bustling bar into the more formal (but still casual) dining room, gazing at the gilt-edged antique oyster plates that adorned the walls. Designer Floss Barber reworked the restaurant’s style several years ago, and the once dark and dreary rear dining rooms have since been widened and warmed with splashes of bright red and lime green. Dark wood, found in both the bar and dining rooms, adds a rustic and historic touch among the cozy banquettes and spindle-backed chairs.

I was lucky enough to get seated at a table in plain view of the shuckers’ stomping grounds, yet still in the comfort of the mellower dining room. I already knew what I was going to order first before I even sat down – oysters, here I come – but I still had an entrée to choose, and that is no easy task. Neff has compiled a menu that stays true to the old Philadelphia fish house mentality, but still manages to spice dishes up with creative touches and untraditional ingredients.

The appetizers are a shellfish lover’s dream come true, with the tasty treats served every which way. From roasted to steamed to Rockefeller to casino, I had my pick of the best seafood preparations Philly has to offer. While they all were appealing options, I knew the true test of a seafood restaurant was in its raw bar.

I opted for the Sansom Street Raw Bar Sampler so I could experience as many of the restaurant’s fresh fish as I could. Comprised of a variety of oysters, clams, shrimp and crab legs, the sampler is a perfect beginning to any meal – and a great dish to split between two people. Served on a tall tower complete with utensils, napkins, and traditional condiments such as cocktail sauce and lemon tucked underneath, the metal plate of seafood is served on top of a bed of ice to keep each bite as fresh as the last.

The types of oysters that appear in the sampler vary by what is freshest at the time, but I was able to indulge in some metallic and juicy Long Islands, rich and briny Warehams, buttery Pearl Bays, and salty Cape May oysters. The entire selection of shellfish, including the smooth cherrystone clams from New Jersey, was fresh, clean, and plump. The expert shuckers definitely did not disappoint – all of the oysters and clams slid delicately out of their shells with all of their natural liquor intact. The pink, peel-them-yourself shrimp were large and sweet, though they were a bit overcooked for my liking, and the bright red crab legs tasted like they just came out of the ocean.

By the time my bowl of oyster stew arrived, I saw a pattern in the restaurant’s presentation of dishes – just plain simple. There are no bells and whistles at the Sansom Street Oyster House – the food just speaks for itself – and old-fashioned tureens are available for soup lovers who want to share. My creamy white oyster stew was served in a rustic brown bowl and garnished simply with specks of deep green chives. Upon first glance, I feared I was about to drink an entire bowl of heavy cream, but the stew was actually light and refreshing. Whole oysters swam through the smooth, milky broth, and the soft undertones of salt and onion accented the shellfish’s rich flavor.

I can’t imagine a visit to a seafood restaurant without nibbling on crab cakes, so I felt obligated to try Neff’s highly regarded entrée: Maryland Crab Cakes. Any fish aficionado knows that crab cakes aren’t as easy to make as they might look. While the ingredients are relatively simple, finding that perfect balance between breading and crabmeat – while not overpowering the dish with spice – takes talent and experience. Luckily, Neff has both.

All entrees are served with your choice of two side dishes, and I opted for two traditional accompaniments – a baked potato and coleslaw. The two golden brown cakes sat simply on the white plate – no frills, of course – alongside a side of Neff’s homemade bright red cocktail sauce. The lump crabmeat in the cakes was moist, rich and slightly sweet, but most of all, it was as fresh as any crab I’ve ever tasted. The crispy, salty bread coating was a lovely contrast to the luscious crab, and the tinfoil-wrapped back potato was steaming long after it hit the table. The cocktail sauce packed a nice punch with its excellent blend of sweet ketchup, spicy horseradish, and Tabasco and Worcestershire sauces, but I felt no use for it. Between the spiciness of the Old Bay seasoning, fresh parsley flakes, and tangy sour cream, the crab cakes never lacked in flavor or needed any additions.

The highlights of the Sansom Street Oyster House’s menu are the eight to ten fresh fish, handpicked by Neff, that are served daily and always with a slight contemporary twist. Deep-Fried, Whole Sea Bass, served over a gingery Thai sauce, is never greasy, and the smoky, Grilled St. Peter’s Fish gets a splash of color and flavor from a sweet chili sauce. Lobster, scallops, trout and flounder are also staples on the menu, and dishes such as the New England Clam Bake and Shore Platter are perfect for sharing with friends and family.

Sticking with the traditional, rustic theme, the Oyster House’s desserts are satisfying and homemade. The creamy rice pudding, highlighted with a touch of cinnamon, brought back memories of family vacations, and the sweet potato pie would give any Southern belle a run for her money. But the best dish to finish off a meal is the hot and gooey Apple Brown Betty, which was gingerly spiced with nutmeg and clove.

The Oyster House’s wine list complements the menu well, with a diverse selection from California, France, Spain, Italy and Chile. A variety of white wines, such as chardonnay and pinot blanc, dominate the list because of their longstanding marriage with fish, but red wine lovers will still have their choice of hearty merlots and cabernets. Sparkling wine and Champagne are also available, none of which will hurt your wallet. The bar also provides several domestic and international beers, appealing to all ages and palettes.

With oysters stemming from all corners of the country and the fresh fish house favorite of Fried Oysters with Chicken Salad proudly displayed on the menu, the Sansom Street Oyster House truly lives up to its reputation. The no-nonsense, casual setting is warm and inviting, and the prices are never overwhelming. With a seafood restaurant like this in the city, it’s a wonder Philadelphians go anywhere else. 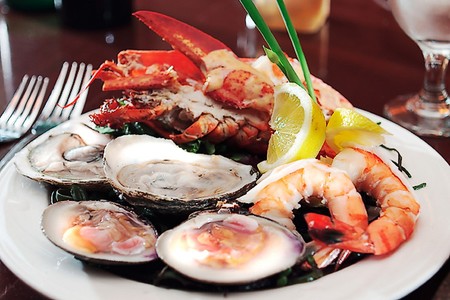 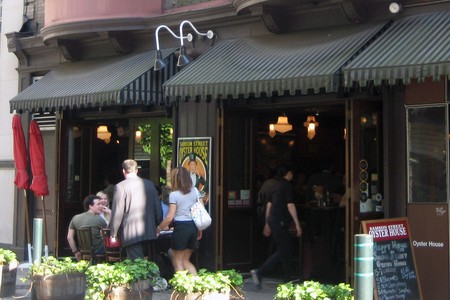 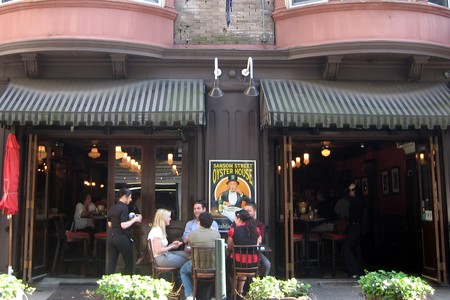 What is "oyster hour"?

During designated hours, diners can enjoy an Oyster of the Day for $1 and $3 for Oyster Shooters.

When do you serve your Mid-Day Menu?

We had a dinner at SSOH today - it was great! Good beer, fresh anbd tasty oysters, superb turtle soup, excelent entrees, relaxed and friendly atmosphere. Our waiter Christian was friendly and attentive. We will definitely go back to SSOH in the future.

I expected much better. Maybe my expectations were set too high. I was definitely not impressed. The service was absolutely horrible and the atmosphere not so great. It took forever to get one round of drinks and there were tons of empty seats in the place. The only positive was the food, and that wasn't anything warranting a return visit. Overall, I wouldn't waste my time or money there again.

This restaurant is closed

This restaurant is closed.