Resting unassumingly on a hill amid the Society Hill Towers, Zahav has given traditional Israeli street food a makeover. Celebrated Chef Michael Solomonov has gone to great lengths to transport the multiethnic flavors of his homeland to Philadelphia. He calls the food “Modern Israeli,” and each small plate is equal parts passion, execution, and rustic goodness. The open kitchen gives a professional demeanor to the 100-seat room, while the smell of roasting lamb and warm glow of the hearth offer a homey contrast. Zahav is Hebrew for “Gold,” and its chefs are alchemists, transforming and elevating simple flavors and ingredients with rich and toothsome results.

Like a castle perched on a hill at the edge of Old City, Zahav offers modern Israeli fare in small plate format. Open only since May 2008, both the restaurant and its chef, Michael Solomonov, have received rave reviews and nationwide acclaim. In a startlingly short amount of time Zahav has familiarized Philadelphia foodies with a new and innovative type of cuisine, while elevating Israeli street food to new heights.

Parking along one of the cobblestone streets that surround the restaurant and this part of the city, my date and I walk up the three flights of stairs to Zahav’s seemingly hidden entrance. Its signage is surrounded by an abundance of trees and other foliage, making it easy to miss this lauded Israeli eatery. From the outside, the dark brick, box-shaped building looks like a school or an office, which masks the carefully designed and comfortable interior.

Stepping inside, we’re led to a small table beside one of the large windows that span almost two entire sides of the space. Another long set of windows allow guests to see straight into the kitchen. A large area with high ceilings, the main dining room still manages to maintain a rustic appeal; this is in part due to the heavy oak tables and chairs, the fiery hearth, and the large hanging photograph of an Israeli market. The welcoming atmosphere is also maintained by the full dining room’s surprisingly low noise level. Pale beams of early afternoon light stream in through the clear glass windows and couple with the elevation to provide the sense of having left the city, even while eating at the edge of one of its busiest neighborhoods. There is also a cozy and cavernous 24-seat private room called The Quarter, where diners are treated to the Chef’s tasting menu.

Born on the outskirts of Tel Aviv, Chef Michael Solomonov is no stranger to rustic cooking. After dropping out of the University of Vermont, Solomonov moved to Israel and worked at a small bakery twenty minutes north of Tel Aviv, and a café called The Coffee Tree. Once back in Philadelphia, he worked at Vetri before becoming a chef at Marigold Kitchen. He then partnered with Steven Cook (the owner of Marigold) to open Zahav, which is essentially a tribute to the foods that he ate in Israel. In March of 2009, the James Beard Foundation named him the “Rising Star Chef of the Year.”

In bringing the true cuisine of Israel to America, Solomonov hoped to replicate the precise tastes of his homeland. As a result, before the restaurant opened, he took his entire staff on a week-long eating tour of Jaffa, Tel Aviv, and Ganei Yehuda (the town where Solomonov was born). The staff learned firsthand how to make the food that would eventually land on diners’ tables in Philadelphia.

While other Israeli restaurants in Philly may excel in a particular facet of Israeli cuisine, Solomonov has attempted to create a menu that demonstrates the complete multicultural nature of Israeli food. Consequently, the menu reflects many of the cultures that have influenced the nation’s cuisine including the Balkans, North Africa, Yemen, Turkey, Bulgaria, Lebanon, and Spain.

The Zahav menu and dining experience are designed to mimic an elaborate and traditional Israeli meal. As such, the meal starts with salads or “salatim,” and hummus with laffa. Next come a few small plates called “mezze” that include dishes like the Fried Cauliflower, and Watermelon and Feta. This is followed by the usually meat-based main course, and is finished with an assortment of deserts.  With such an interesting menu, it takes us a little while to peruse its contents and come up with a plan. With a menu of small plates meant to be shared, a strategy is clearly required.

The wine list is concise and clearly of a carefully chosen cadre. There are just under sixty bottle offerings; with an even selection of white, red, rosé, and a few bubbly choices. There are also ten wines offered by the glass. But what is most interesting about the list is that the majority of wines come from Israel, Lebanon, and Morocco. Among the specialty cocktails, the signature drink is the Lemonana: a classic Israel mix of bourbon, muddled mint, fresh lemon, and verbena.

The first item to arrive is the Hummus-Tehina served with house-baked Laffa. I’ve heard about the hummus from many different sources,  many of whom concur that it’s the best they’ve ever had. As a result, I’m very excited to dip into the creamy mixture. Like most of the food at Zahav, the hummus is based on a recipe straight from Israel. This one comes from Ali Karavan in Jaffa, whose hummus Solomonov considers the best in the country. It’s a delicate balance of chickpeas, olive oil, lemon juice, tahini (sesame paste), garlic, cumin and parsley; the result is a smooth, rich, and slightly nutty show stopper.

To scoop up the creamy hummus, Zahav serves Laffa -- an Iraqi-style pita made by a cook who was sent to Israel to perfect this singular skill. The dough is made at 8:30 every morning and baked to order in a traditional Taboon, which is essentially a wood-fired brick oven. It is served warm, and is elastic and chewy. The laffa is delivered to the table garnished with a sprinkle of za’tar, a common Middle Eastern spice blend and a drizzle of olive oil.

While we are thoroughly enjoying the hummus and fresh laffa, the Salatim (a total of four salads) arrive. There is a classic Israeli salad that is a mixture of fresh, cool cucumbers and tomatoes, finely chopped and neatly dressed with lemon, olive oil, and parsley. Across the artful stack of salads is a savory preparation of warm stewed carrots with a hint of jalapeño. Then there’s a mixture of spiced whole chickpeas, which is a mellow complement to the acidity of the Israeli salad and the heat of the carrots. Lastly, there’s a surprisingly sweet pickled beet salad. Sprinkled with crushed almonds, the beets take on a dessert-like quality, making this tower of salads a mini meal unto itself. The kaleidoscope of colors -- green, red, orange, lavender and an earthy brown – are as pleasing to the eye as the many flavors are to the tongue.

This course is followed by the first mezze of Fried Cauliflower served with a sauce of labaneh (a white Middle Eastern yogurt cheese), chive, dill, mint, and garlic. The cauliflower is cooked until caramelized and slightly sweet. The yogurt sauce makes a tangy, fresh and creamy companion to the crunchy vegetable. No wonder this dish was selected as one of the “Best Restaurant Dishes of 2008,” by Food and Wine magazine.

Our next small plate is Cured Wild Sturgeon, served with a sumac-spiced corn mixture. Beautifully laid across a long rectangular plate, the sturgeon is salty and very fresh. Having finished our last small dish, our waiter briskly clears and resets the table, laying down a new set of silverware at each place setting.

We share our main dishes too, and the first is named The Galil. The dish is made up of a medium-sized section of grilled baby eggplant atop a healthy mound of spiced yellow rice. The eggplant is liberally covered in a slightly bitter Tehina sauce, with a sweet pomegranate syrup drizzled overtop. Artistically completing the plate are crushed pistachios that provide a nutty, hearty finish. Along with the dish, I try out my date’s Jerusalem Cocktail. The tasty pink-hued beverage, served in a champagne flute, is a mixture of sparkling wine and a variety of fresh sabra fruit that comes from a prickly pear cactus native to Israel.

For the second main dish, I select the Bulgarian. The two meatballs made of ground beef and lamb are firm, savory, and steaming. The lamb balls sit on top of a small mountain of rice and beans. The white basmati rice is a nutty complement to the rich chunks of meat. The white beans are cooked in a mouthwatering tomato and parsley sauce. I pair the meaty dish with a beer, the Tel Aviv Black and Tan (a mixture of Goldstar Lager and Gold Malt).

For dessert we have the Konafi -- this dish is a smooth combination of kataifi (a shredded phyllo dough pastry), ricotta cheese, rosewater, and pistachios. The sweetened ricotta is very light and creamy; it plays expertly against the crunch of the phyllo pastry, which is like a combination of a refined funnel cake and an Italian pizzelle. We also opt for the Roasted Pear, along side a regal Cashew Baklava served with white chocolate panna cotta. The nutty and cinnamon-spiced baklava, vanilla flavored panna cotta, and juicy pear are delightfully reminiscent of apple pie and vanilla ice cream.

Fully content and satisfied, we have truly dined like nobles. Looking around, I notice that the other casually dressed patrons appear equally satiated. It’s late afternoon now and I smell the hearty scent of lamb cooking; the kitchen staff already busily preparing for their dinner service. In Hebrew, Zahav means “gold,” and today the food has certainly lived up to its glittering expectations. There is a clear sense of passion in the food and Chef Solomonov’s effort to bring authentic Israeli cuisine to Philadelphia has succeeded, indeed. Solomonov’s gift is bringing a taste of the Old City to our Old City, without requiring the gilded checkbook of a king. 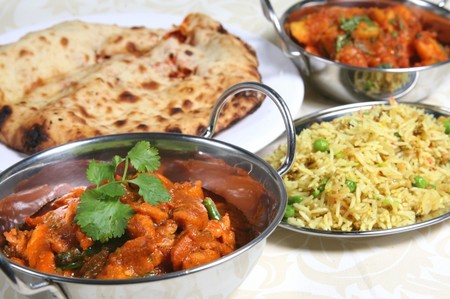 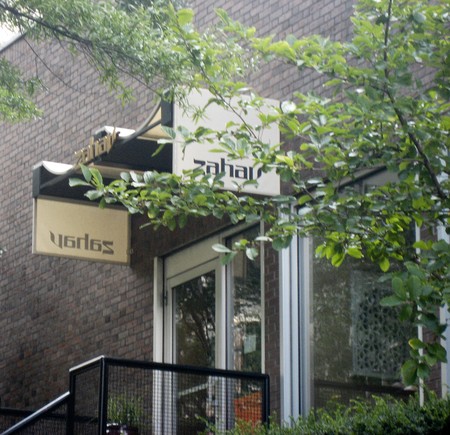 A street view of Zahav 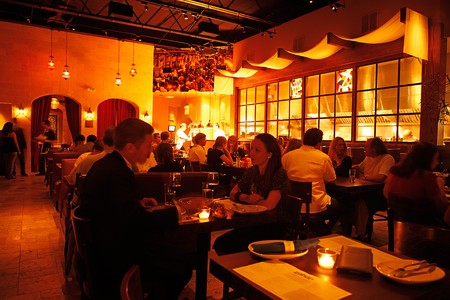 An interior view of Zahav during dinner 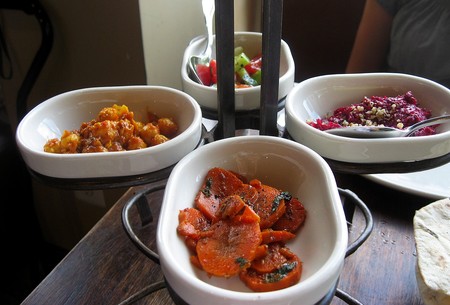 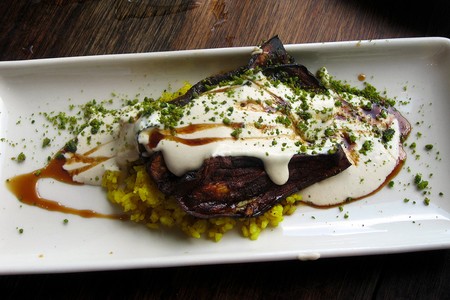 Limited street parking is available. A public lot is located on 2nd street between Walnut and Chestnuts Streets.

Do you serve dessert?